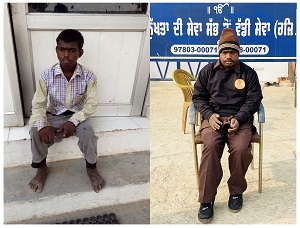 It was in August 2016, we came across Daraha railway station a mentally retarded boy of about 15-16 years of age, with IQ of a two year old child, able to tell his name NEERAJ only nothing more. He was very frail and shocked, with lots of scratches and wounds all over his body. We picked him up and brought him to our Dhaba on GT road near Doraha. After feeding him we decided to give him a shower. We were “shocked” to see a wound on his rectum since he was not able to sit. It seemes to be a victum of sodomy. The boy was very weak and frightened. He was kicked out of a running train or dropped by his parents, since they could not afford to get him treated and subsequently afford to take care of him for his whole life. Maybe he was a part of a big family with lots of kids of a poor family. As he appeared to be a victum of sodomy we contacted the local police who denied help in such matter.
At that time we had about 4-5 such types of people staying with us. We decided to get him bandaged and treated for other problems. He was diagnosed with wheat allergy. We started medicine for wheat allergy as well and now he's quite well. He was send to a school of deaf & dumb  along with other kids at out NGO. He picked a lot. With the grace of God Neeraj is staying with us and leading a healthy life at Manukhta Di Sewa Society.
Gentleman, I cannot resist a question which bothers my mind after seeing the plight of such children who are thrown away by their own parents to die. Is there no system to help such kids who are thrown out by parents, left to die, sodomised and given a variety of wounds, which will leave an impact on the mind of the child. Can’t our Govt. establish shelters for the weak children, provide medication and a brother for their social security. Even our religious bodies should look into it and provide financial help for mentally retarted children.
How can this society disown these kids who can tell only their name. So sad to confirm that there are thousands of such kids only in Punjab, who are mentally sick and are thrown out of there home their parents with no fault of a child. There should be a law to deal with the acube problem of the mentally retarded , desf and dumd and other bed ridden childs due to ather type of dieses. Govt must allocate funds for the treatment , education and upbringing for such kids.
Gentlemen your prayers and wishes and moral support is needed , to help them, the best possible ways.

Stay Informed. Keep Get In Touch with us